Clarence Iowa has found that the Lincoln Highway is a route to getting things done. The Clarence Lincoln Highway Committee was founded in 1997 by local businesses and citizens to organize a fun summer fund-raiser for community projects. Their efforts have expanded to many other projects, and this year, the group took over the town’s Christmas festival.

Bad weather delayed the fun one day to December 2, but it was well attended. Businesses contributed generously, such as Kelly Tree Farm, which gave evergreens to line the streets, and individuals baked lots of desserts for a Cookie Walk, with all proceeds benefiting the 2009 Clarence Sesquicentennial Community Projects. The Tipton Conservative covered the event in advance.

A portion of the Festival of Trees display from Christmas in Clarence.

The summer event, the Clarence Lincoln Highway Festival, is still their major effort, which we’ll report on separately. Jen VanOort, editor/designer of the Clarence Community Newsletter and webmaster for www.lincolnhighwayfestival.com, says, “The festival went along at a quiet but profitable pace for many years until two years ago when new leadership was established and the festival really blossomed into an exciting, fun, well-attended event for the entire area, and was even mentioned in the Chicago Tribune.” 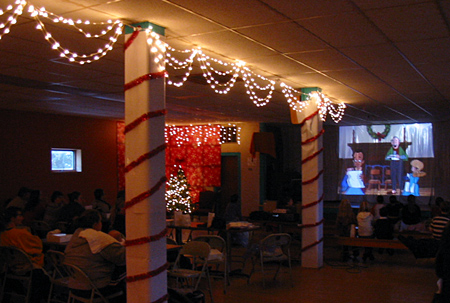 Other plans for the future include a farmers’ market, downtown streetscaping, façade improvements, and concerts and ice cream socials in the downtown park. Jen says, “Keep your eye on Clarence! We have big plans! The funny thing is, our leader, Jamie Wilhau is not native to Clarence or even Iowa, but she feels so passionately about this town, its history, and its potential that she is infectious! Together, we dream up a lot of ideas!”

Jen adds that Clarence is special to highway fans too. “We have the distinction of being one of the only communities left in Iowa with the Lincoln Highway as our main street! No bypass yet … although they are threatening that in the future”