Closed for 12 years, the Colo Motel has reopened, giving Lincoln Highway tourists a new-style, old-fashioned lodging option in central Iowa. It is part of the Reed/Niland corner complex that includes a cafe and gas station, both also restored. The cafe is operating and is a must-stop itself; the 1920s gas station is for display only but is set to house a country-style store. 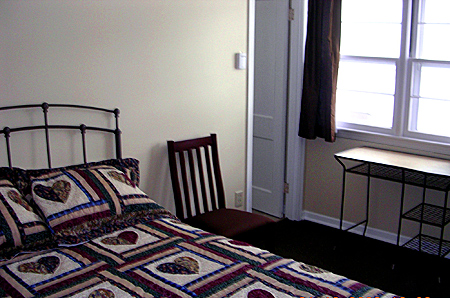 The motel’s six rooms rent for an affordable $49.99 per night or $175 for five consecutive nights. Scott Berka, Colo city clerk, says that other than “waiting for some of the furniture to arrive,” the rooms are complete with cable TV, wireless internet, central air, pillow-top mattresses, and room service from the café. The Colo is on the forefront of restoring mid-century motels for 2-lane tourists, and also gives locals a lodging option for out-of-town guests. 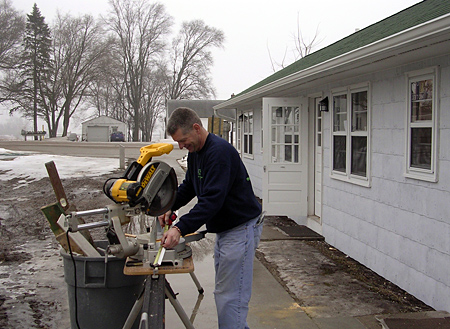 Above: Stuart Huse, one of the owners of Flat-Top Concrete & Construction, the prime contractor for the project, finishes the woodwork. Above photos courtesy Scott Berka.

The roadside one-stop opened about 1920 at the corner of Lincoln Highway and US 65, the old Jefferson Highway, but declined in recent decades as the old road was bypassed. The restoration is a project of Colo Development Group and the City of Colo; it has cost nearly $1 million including $663,000 in grant funding (from the Iowa DOT’s and Federal Highway Administration’s Transportation Enhancement Funding) and about $270,000 in local donations.The one-stop

An article in the Nevada [Iowa] Journal reported on the opening, and quoted Berka and Sandy Wilfong, manager of Niland’s Café and now the Colo Motel. She praised the retro-stryle rooms and appointments such as wrought iron headboards and curtain rods, and quilts on the beds. Come Spring, Wilfong hopes to have a farmers market at the corner on Saturdays.

The motel is at 18 Lincoln Highway in Colo. Reservations are taken through Nilands Cafe: (641) 377-3663. To learn more about the complex, go to the Colo Iowa web page and click Reed/Niland corner at the bottom of the left-hand column.