A detailed and engrossing story in The Washington Post recalls the tumultuous genesis of the Lincoln Memorial, including how the monument that we know was instead almost a road named for the President. It was referred to then as the Lincoln highway, the Lincoln Memorial Highway, or simply Lincoln Way – all years before the Lincoln Highway of this blog was proposed or its association incorporated in 1913. The article is titled, “The Lincoln Conspirator: Illinois Congressman Joe Cannon was determined to stop the Lincoln Memorial from rising on the Mall. He almost succeeded.” 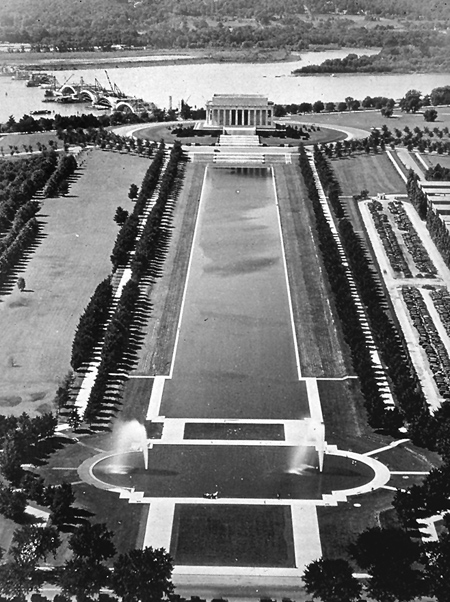 A national monument to honor Lincoln in Washington, D.C., was proposed soon after his assassination, but the idea foundered until 1901 when the Senate Park Commission proposed the current monument as part of a plan to remake the Mall.

Here are excerpts that mention the idea of a highway:

What had most impressed [former congressman James] McCleary during his tour of Europe was the Appian Way, the ancient road in southern Italy built by Roman censor Appius Claudius. “Who has not heard of the Appian Way?” he wrote in the article. “What a fitting memorial to Lincoln would be a noble highway, a splendid boulevard, from the White House to Gettysburg.”

“The Lincoln Way” would include one roadway for automobiles and one for horse-drawn carriages and wagons; plus two electric railway tracks: one for express trains, the other for local trains. Stately rows of trees would border the highway. Down the middle would be a well-kept lawn 40 to 50 feet wide, with beautiful fountains and monuments at intervals along the way. Given “the possibilities of electrical illumination, the beauty of this boulevard when lit up at night may be left to the imagination,” McCleary wrote….

Rep. William Borland, the Missouri congressman who led the highway effort, predicted an easy win for the road. He believed cars would become more popular, though he didn’t drive one himself. Many congressmen found the prospect of obtaining federal dollars for road projects in their own districts tempting. Road supporters, backed by the auto industry, were well-organized. They flooded Congress with telegrams and petitions. Architect Glenn Brown’s campaign in favor of a Greek temple was no match. Everyone knew that a House victory for the Lincoln highway would create a stalemate and indefinitely postpone the creation of any memorial because the Senate wouldn’t agree to the road….

Highway advocates attacked the memorial plan as foreign and not representative of Lincoln, according to the Congressional Record. “There is nothing in this Greek temple . . . that even suggests . . . the character . . . of Abraham Lincoln,” said Rep. Isaac Sherwood of Ohio….

A highway is “nearer to expressing the epoch of American history than any other form of memorial,” said Borland, who emphasized that a road was unanimously endorsed by the Grand Army of the Republic, whose members were Union veterans. The Greek temple is the most hackneyed form of architecture known, he added…

Knowing that aesthetic arguments weren’t likely to sway members, [architect] Brown had prepared a cost estimate for the Lincoln highway, which Rep. Lynden Evans of Illinois used effectively during the debate. “It will cost at least $20 million to build a really distinctive road,” he said, and pointed out that it could be used only by those who could afford a car. “If a trolley line was placed upon it so that the plain people could use it, it would be valuable and useful . . . But it would not be a memorial of Abraham Lincoln.”

There were accusations at the time that road advocates tended to be those who would benefit from that project. Accordingly, one commenter to the article has written, “The ‘Road to Gettysburg’ sounded like the ‘Road to Nowhere’ considering Gettysburg was not a commercial center like, say Philadelphia or NYC. The practical value of a highway can’t have been a totally futuristic concept.” Of course, the Lincoln Highway proposed by Fisher would encounter some of the same arguments as the original Lincoln Way. Washington D.C. leaders would even advocate for Fisher’s coast-to-coast road to bend their way. Only after repeated pleas would the city get an official feeder – from Philadelphia through D.C. to Gettysburg, just as they had sought earlier.