Jim Steeley, of the Westmoreland County Historical Society and a LH researcher, came across a Lincoln Highway item in the September 30, 1915, Greensburg Daily Tribune, about rerouting the LH away from Madison, Pennsylvania. Problem is, the LH never went through Madison! 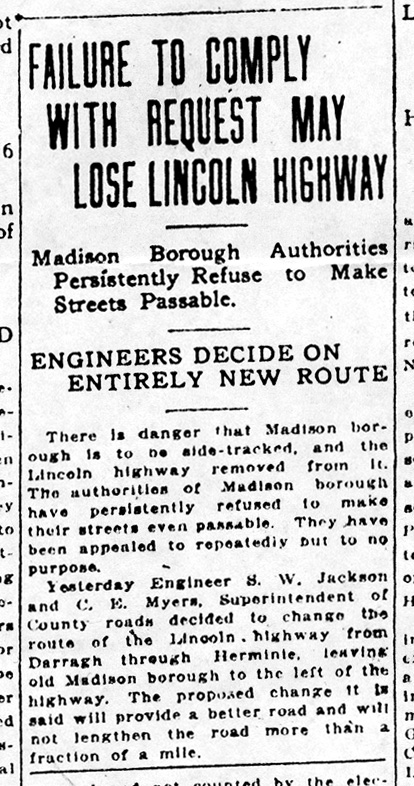 The article “Failure To Comply With Request May Lose Lincoln Highway” appeared on the front page of the paper describing Madison Borough’s refusal to improve its streets, therefore endangering the borough “to be side-tracked, and the Lincoln Highway removed from it.” It cited an engineer and a superintendent of county roads who “decided to change the route of the Lincoln Highway from Darragh through Herminie, leaving old Madison Borough to the left of the highway.” It would “not lengthen the road more than a fraction of a mile.”

But the Lincoln Highway is not known to have gone anywhere near Madison, let alone through it. To follow this route, Jim explains, the Lincoln Highway would have run through Greensburg to West Pittsburgh Street where it intersects with West Newton Street and hence to the West Newton Road (Rt 136) through Darragh, o to Madison (until it was bypassed) and Herminie, then north on Clay Pike through Rillton to Circleville at the top of Jacktown Hill, where it would join present-day US 30 west of Irwin. The map above shows the commonly known LH in red, the implied route in blue, and the topic of the article (routing through Madison) in green.

The first official LH road guide, published spring 1915, lists Greensburg followed (heading west) by Grapeville, Adamsburg, and Irwin—all along the red-marked route, similar to today’s US 30. Why, a half-year after the 1915 guide was published, was it believed that these towns were on the Lincoln Highway?