I revisited Rick Sebak at the WQED-TV studios to see the near-final cut of his Lincoln Highway documentary to air October 29. He has a typical end-of-project dilemma — so much cool stuff to show but not enough time in the 56-minute program. And his deadline to complete the work is this week. I was surely no help, advising that he show more of this or that when he needs advice on what to cut!

Here’s where I was set up to watch. You’ll recognize attendees at the 2008 LHA conference gathering for a group photo in front of the Sunset Motel in Evanston, Wyoming. 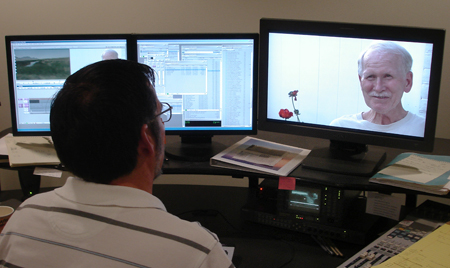 In another room, above, video editor Kevin Conrad worked on an interview with LHA past-president Jesse Peterson for the show’s closing moment, a montage of personalities and scenery.

It’s a great show, with lots of info and imagery of the highway, and a theme song written for it by Buddy Nutt that is stuck in my head! ….. “Goin’ all the waaaayyyy, on the Lincoln Highwaaaayyyy!”