Perhaps the most fun, colorful blog ever to follow a Lincoln Highway road trip is being posted by Bill and Karen McKibbon. They set out from Ontario, Canada, and joined the LH at Joliet, Illinois. They’re following the old road west to the Pacific (at which time they continue northward), taking tons of photos like above: their car at Preston’s in Blelle Plaine. Bill told me they’re using my Greetings from the LH and LH Companion (buy ’em on Amazon!) and noted how quickly things change: “Some places no longer exist that you wrote about, some things that deserve a marker or plaque don’t, but we are finding the old road as best we can.” 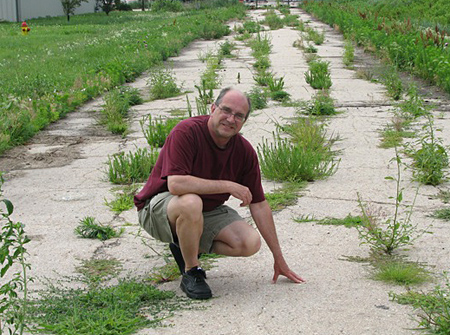 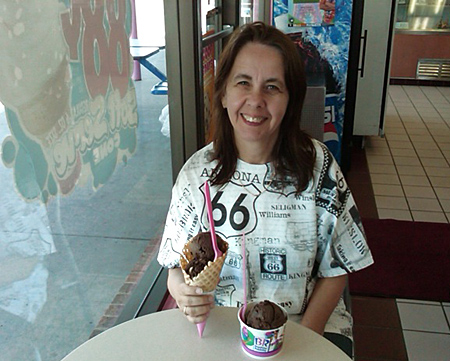 That’s Bill at the Seeding Mile in Grand Island and Karen (they LOVE finding great desserts) in Cheyenne. Don’t pick on her Route 66 shirt — LHA HQ was out of shirts!

LH boosters also should note that almost every cafe they stopped at was CLOSED! In early JULY!!

Bill makes some other interesting observations. This is from Kensinger’s cool deco station in Grand Island, Nebraska, which was featured (along with owner Dick Grudzinski in the PBS special about the LH):

Dick pointed the way to the original early 1900’s concrete behind his gas station. It is very overgrown with weeds and long abandoned. What really surprised me is that there is no sign or plaque acknowledging what this concrete represents. The Lincoln Highway is not promoted like Route 66 is. What a shame.

We loaded up the car and drove to Shelton NE where we wanted to visit the The Lincoln Highway Visitors Center. 10 AM on a Saturday morning and this place is locked up tight. There was a notice in the door with a phone number to call and someone would come over. We peaked in the door and the windows and there wasn’t anything in there that we felt was worth disturbing someone. I am sure they had something important to do or they would be here greeting Lincoln Highway travellers. There were no t-shirts to purchase, no postcards, basically it appeared to be an empty room, with a few things hung on the wall.

We mentioned to the lady at the [Sod House] Museum that we were driving on the Lincoln Highway and she said, “oh you will want to head North then to get on Highway 30” We said no, that we were driving the original Lincoln before there ever was a Highway 30. She thought Highway 30 was the Lincoln. This poor highway, no one seems to care much or know much about it. Here we are from Ontario Canada, and we know more than the locals.

Well, I guess there’s something to be said for not being over-commercialized….

They post at billstraveljournal.blogspot but click HERE to start with Day 1 (they’re on Day 11). Enjoy the trip!! 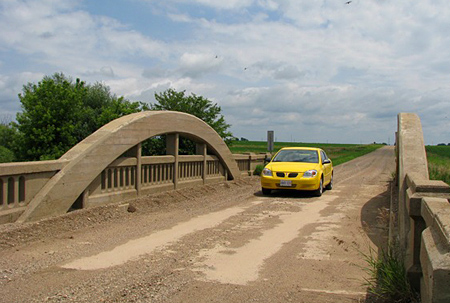