LINCOLN HIGHWAY NEWS IS A BLOG BY BRIAN BUTKO
A fire has left the future uncertain for a vintage motel on the Lincoln Highway south of Plainfield, Illinois. About two thirds of the Lakeview Motel, 15824 S. Joliet Rd. at Renwick Rd., was damaged at a loss estimated at $350,000. The Plainfield Patch reports police believe the blaze started in an unoccupied room and quickly spread into the roof of the 19-room motel. The longtime maintenance manager thinks an unhappy tenant may have been the source, and said, “Out of 19 rooms, 10 of them are pretty much gone.” A photo the paper ran from before the fire (by Kevin Whaley) shows the c. 1950 motel. 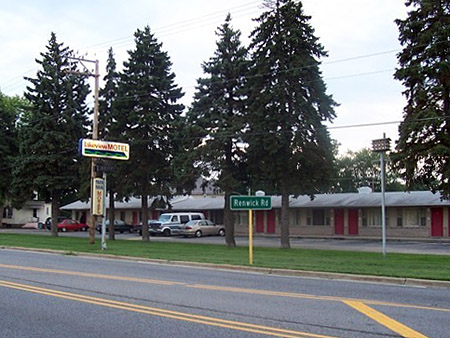 The Herald-News reports that even before the fire, the village’s building inspector says multiple code violations made the buildings a dangerous place to live. He has since condemned the motel, house, and mobile homes but the owner would rather rebuild than demolish. The inspector said he’ll give the owner 30 days to figure out how to proceed: “I think people deserve better…. And it’s a prime corner. There’s a lot of potential on this corner.”

Like most mid-century motels, tourists are no longer the primary customers. One online reviewer cried “WHAT A DUMP!!!!!!: This place does not belong in Plainfield. A drug den, where there is nothing but losers & transient people there. Not even safe to park vehicle there. Should be torn down…” but a response said, “It’s not the greatest place on earth, but some people are not as fortunate as others [and] have to stay wherever they can afford and at least they have a roof over their head and not sleeping on the corner.”