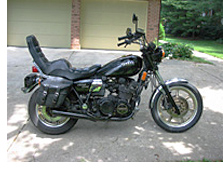 LINCOLN HIGHWAY NEWS IS A BLOG BY BRIAN BUTKO
Harold de Bock, who lives in Holland (but studied at IU Bloomington Indiana in the 1970s) is about to depart on a Lincoln Highway trip across the Midwest. He’ll pick up his motorcycle — a 1980 Yamaha XS850 Midnight Special — on Wednesday Aug 31 to test ride the bike after 2 years of idle, then on September 6 he will start his LH adventure in Fort Wayne at Cindy’s Diner. He’s meeting a guy who has the same type vintage motorcycle and will travel that afternoon to about Valparaiso. He continues:

September 7 I hope to have coffee in the morning with the LHA’s Jeffrey Blair. And then later in the day I will meet another person at Rochelle who also has the same motorcycle as I do and he will ride Lincoln Highway with me. So, as opposed to R66 and Dixie Highway which I did solo, this will be a ride-for-two. I will ride US 6 (Grand Army of the Republic Highway) back. I need to be back in Bloomington for the centennial celebration of the School of Journalism at Indiana University, my alma mater 1971-1974.

I have copied the detailed maps from your Lincoln Highway Companion book on A4’s which I will have in a plastic folder on top of my fuel tank – so you will be my guide.

Look for his first entry at:
www.yamaha-triples.org/forums/thread-view.asp?tid=15202&posts=5

2 thoughts on “From Netherlands to tour the Lincoln Highway”