LINCOLN HIGHWAY NEWS IS A BLOG BY BRIAN BUTKO
The Plainfield Patch features the story (and photo below) behind a diner and gas station best known for the windmill that marked the roadside business. The Windmill was along the Lincoln Highway southeast of town. It was also just off an alignment of Route 66 that shared three blocks with the Lincoln Highway. 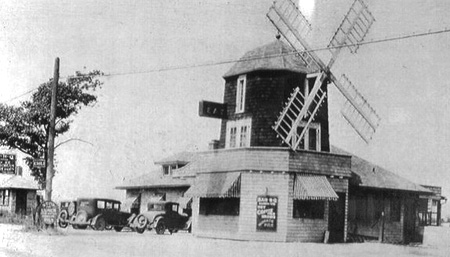 John and Mabel Powell leased land at the southwest corner of Lake Renwick around 1925 for their whimsical building. The windmill served as the entrance to the diner and also had a canopy over gas pumps. The upper floors were an apartment for the Powells and their son Robert. The Depression led to the business closing around 1935 and it was leased to James Lyon, who removed the gas pumps and enclosed the canopy to provide a large saloon. Operating as The Palomar and later The Mill, the business survived into the mid-1950s.