Ken Ruffner wrote me with a question regarding an image in my book The Lincoln Highway: Pennsylvania Travelers Guide. It’s the historic photo on page 153 (1st ed., 1996) of the Horseshoe Curve above McConnellsburg, Pa. 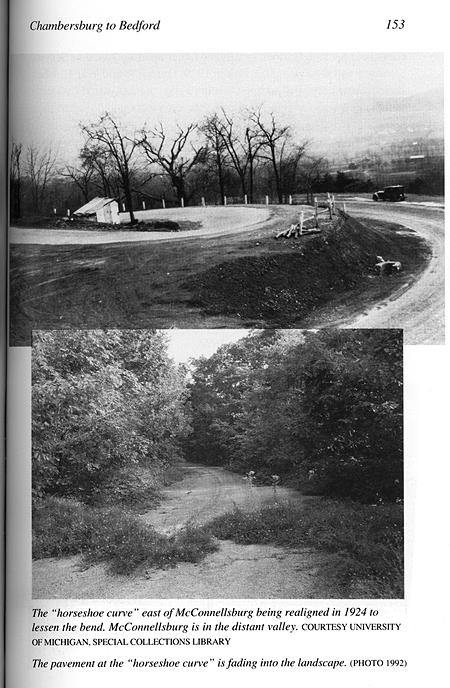 I had said the view is looking west to McConnellsburg, with the new road on the right. Ken wrote, “but then the road on the right is lower than the one on the left when in fact it really is higher on the hill… this photo doesn’t register with me…. could you please help me out with this so I can let it go… a friend of mine and I left the area with more questions than we started out with.” 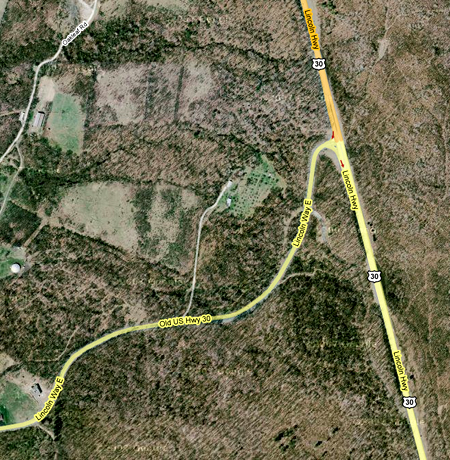 Above is an aerial view showing modern US 30 as a straight line and the old LH/US 30 curving up the mountainside. They still join at a prominent horseshoe curve but I wrote in my book that the photo was along the old curvy road, about where the “y” is in “Lincoln Way E.” I had discerned this by walking the old road, but after Ken inspired me to look at the aerial view, I realized the entire curve survives, though only partially driveable. The “lost” remnant is on the west/left side of Old 30/Lincoln Way E – it’s much more visible in the close-up below. 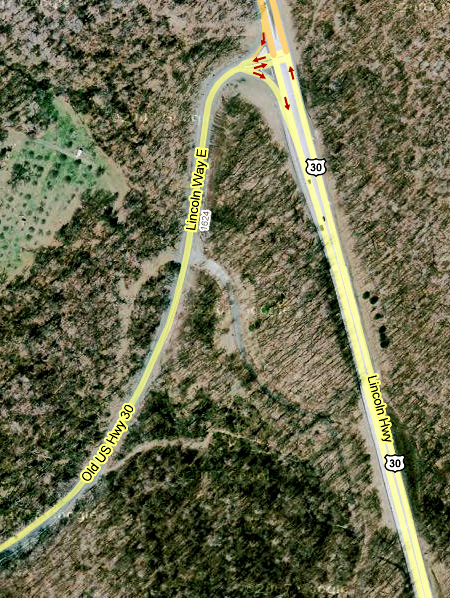 I see where Ken could be confused, but the new curve was broader and hence closer to the drop off. Look below at my proposed routings: red is the original (we’ll call it 1913 for LH reference), purple is the new (1924) curve. The original (red) road/curve that sat higher would have survived the 1924 reshaping, as seen in the historic photo, but was erased when the current road split the horseshoe about 1970.

The topo maps show the evolution, the first showing the original curve as a sharp turn, the second showing the broader 1930 revision.

The last mystery is the little road south of all this that likewise has a turnoff to the east. I marked it in blue. Is it an earlier alignment? A detour during construction in 1924? Or 1970? Or was there a house there at some point?

Note about exploring the 1924 alignment  — the road in my 1992 photo is blocked and walking it may be trespassing now, though perhaps it’s just blocked to stop traffic. When I walked it back then, it was beautiful and thrilling to be discovering an old alignment. What an eerie feeling to stand where thousands of cars once chugged up the mountain.